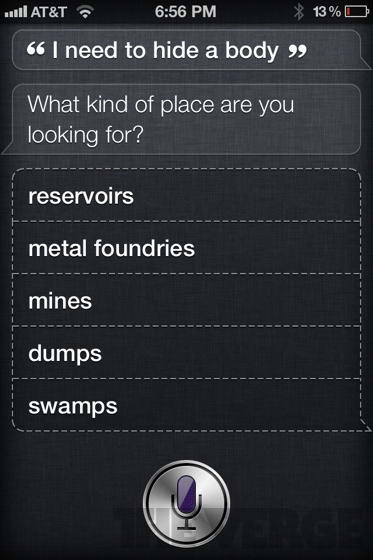 Siri and I have been hanging around with one another for about three years now. As you might know, Siri hasn’t been Apple’s most successful innovation. Her answers are vague at times, or not on point, or downright useless. But even so, she’s fun to have around.

She’s always game to help, and she won’t judge you. Need to hide a body? She’s not going to scold. She won’t turn you in. Instead, she’ll work with you to figure out what’s best for your situation, and she might even stimulate some new thoughts for you. I’d never have thought of a metal foundry! A mine, yes. But not a metal foundry.

Siri, I recently learned, has a well-guarded secret. She can be a he at the touch of a screen. Just go to Settings on your phone, tap General, then tap Siri, and you can change her voice from female to male.

Guy Siri carries himself with slightly more authority (to my ear anyway), but he’s equally vague, off point, or useless. I asked whether he’s a man or a woman. His response? “I was not assigned a gender.”

Next time you think you’d like to send Woman Siri packing, maybe you just need a break. I found that Guy Siri was a nice change of pace. After a few days, though, I wanted Woman Siri back. I’ve grown accustomed to her voice.

(One final Siri note: Apple keeps her/him blissfully unaware of the competition, as evidenced by the exchange below between Siri and my friend, Ken Vaughn.)